Isocyanides interact in a similar fashion with transition metals as their isoelectronic analogue carbon monoxide, and their elemental reactions have been extensively studied within organometallic chemistry.[1] Moreover, transition metal catalysis has enabled isocyanides to expand their synthetic utility in novel organic processes.[2] This is reflected in the plethora of examples of palladium catalysed imidoylative cross-coupling reactions towards the synthesis of nitrogen enriched heterocycles and fine chemicals.[3] Although the imidoylative transformations catalysed by palladium result in synthetically useful and privileged heterocyclic scaffolds, the metal is highly expensive and has a low earth-abundance. Therefore, it is desired to employ the economically more viable first row transition metals, commonly referred to as base-metals. The base-metal catalysed imidoylative transformations are much less investigated and the development of novel imidoylative cascade reactions will be one topic of this research. In addition to the imidoylative transformations, the transition metal catalysed coupling of isocyanides and carbenens will be investigated. The coupling of an isocyanide and a carbene leads to a ketenimine, which is a highly versatile synthetic intermediate and can be employed as intermediate in cascade processes. In short, we attempt to exploit the intrinsic reactivity of isocyanides under transition metal catalysis in order to develop novel one-pot cascade reactions in the synthesis of complex cyclic nitrogenous scaffolds (Figure 1). 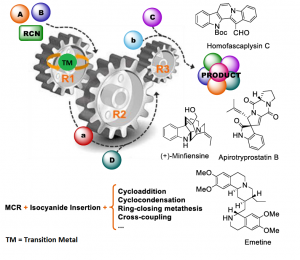